"I love working with entrepreneurs who are ambitious and focused on the user. The best ones I have been lucky to work with are confident without attitude. If you are applying computer science & design to massive markets and want to make millions of users happy, I’d love to team up with you!"

Keval invests in digital media, consumer Internet and mobile companies. Keval, a past Google executive and well-known angel investor, joined InterWest's IT team in 2011. He is a board member at AdsNative, Cuyana, Grokker, Joyus, Hownd, The RealReal and Triposo, and serves as a board observer at Apteligent. Keval is also an investor in Aviate, Canva, CrowdPac, Famo.us, Knotch, GainFitness, HireArt, Optimizely, Victorious, Vidora and Wand Labs.

As Google's former director of product management, Keval led teams that launched new advertising products and businesses — including video/TV ads and an expansion of AdWords. He also launched syndication of Google's products to third parties. Prior to InterWest, he was an angel investor in several start-ups including Aereo, Aviate, MyLikes, Backblaze, Rixty, SetJam (acquired by Motorola Mobility/Google) and investor in AngelPad, a startup accelerator.

Immediately prior to joining InterWest, Keval was vice president for product at Digg. Earlier in his career, he was a co-founder of Achex, an Internet payments company acquired by First Data. Before joining Google, Keval was an investor at two venture capital firms, ONSET Ventures and Morgan Stanley Venture Partners.

Keval holds an M.B.A. from UC Berkeley, an M.S. in computer science from UC Santa Barbara and a B.E. in electrical engineering from the University of Mumbai. He is a member of the Dean's Advisory Board at UC Berkeley's Haas School of Business and also sits on the Board for the Lester Center for Entrepreneurship at UC Berkeley.

Less than one third of the world's population has Internet access; less than one fifth has smart phones or is on a social network. We are still in the early innings of mobile and social internet. The best is yet to come! I can't wait to see how my son will use technology to learn, play and socialize with his fellow citizens across the globe. For entrepreneurs with big ideas who are passionate about building products and businesses for today's three year olds who will be
tomorrow's decision makers, my partners at InterWest and I are open for business. We want to help accelerate your vision.
Let's get to work. 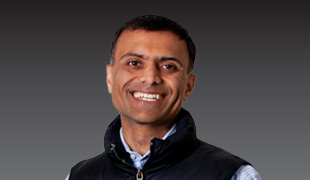 Tips for Product Managers: Be Odo from Star Trek
November, 2014